Another Cavalcade Of Griffey Cards IV 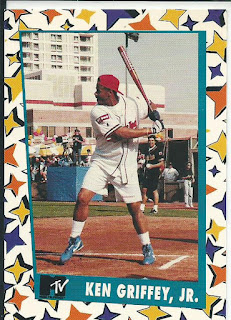 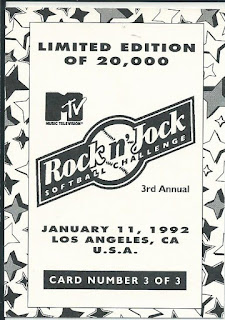 One of my final Ken Griffey Jr. cards of 2016 was from a unique three card set that was connected to MTV’s 3rd Annual Rock N’ Jock” Softball Challenge in 1992. The set was just three cards and I am not even certain how they were handed out, I would think they were given out at the event. The other two cards in the set are MC Hammer and Frank Thomas.

For those who may not remember, the MTV Rock N’ Jock challenges were an annual sporting events put on by MTV beginning in 1990 and teams with names like Bricklayers, Violators, Homeboys and Awayboys were made up of athletes, actors, comedians and musicians. Over the next 11 years MTV rotated the sports with basketball and softball both being played each year but they did toss in football twice, baseball twice and bowling once.

The card is on my Top 10 Want List and even though I picked it up in 2016 I am listing it as a 2017 pickup. I don't think I will be picking up many cards from my list this year so this may be my only chance to add to the 2017 added list. The card's spot on the Want List will be replaced a Jay Buhner card: 1997 Columbus Clippers 20th Anniversary Team Issue #5