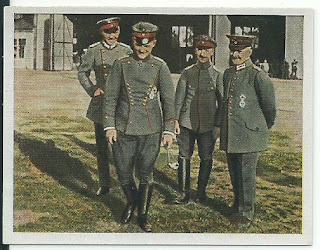 This month’s VCoM is another tobacco era German cigarette card of the Red Baron; this 1937 Manfred von Richthofen is from a pack of Haus Bregmann Privat and similar to the early American tobacco era cards there are a variety of backs. So far I have seen 6 different backs so of course I will eventually have to track down as many as I can find.

The back of the card says that he was the leader of the most successful squadron of the war but was shot down on April 21, 1918 after his 80th victory and was replaced by Goering (Yes, that Hermann Goering who became Hitler's #2 man). At the time this card was printed in 1937 there were 9 squadrons bearing his name.

The card is rather thin, almost sticker like, and is not standard tobacco cards size being shorter than most tobacco era cards but wider. Richthofen is in the front (Second from left), I tried searching to figure who the other three men are with him but I was not able to figure it out. 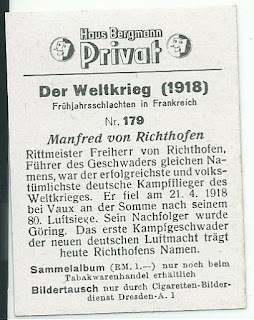