Griffey Is Permanently At Home 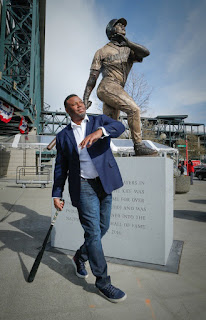 Yesterday the Mariners unveiled the new statue of Ken Griffey Jr outside of SafeCo Field. The statue is located on the corner of Edgar Martinez Dr. and Dave Niehaus Way, a location that is now being referred to as the Mariners Triangle.

After the unveiling Griffey took his famous “swing” pose next to the statue, which is now my phone’s background. After the ceremony Snoop Dogg showed up, he said that he couldn’t make it to the unveiling but wanted to get his picture with the statue. He actually posted a video of his visit to the statue on his Twitter feed. 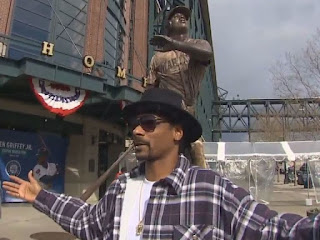 I do not know when I will head up to Seattle again but you can be sure that when I do I will be taking my picture with the statue and make sure to include some of my Griffey wallet card.
Posted by Corky at 4/14/2017 05:02:00 PM