Someone Selling My Digital Art, Not Cool Round 2 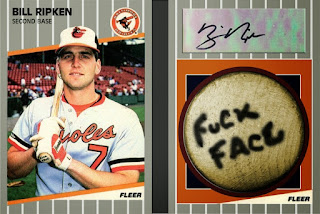 Once again the guy who had stolen my digital image of my What If? Billy Ripken bat knob card is at it again and selling the card again. When I contacted him on January 4th about it he ended the auction and while he gave me a shtick about why I should allow him to sell the card he did agree to not sell it. I have made it routine to check every so often and last night I came across the same guy selling the same card using my image to make a profit for himself.

I tried to contact him through the question link in the auction but he apparently has turned off the "Ask a question" link for his auctions. I am guessing he probably gets plenty of complaints and won't face up to his actions. I had saved his emails from our conversation in January so I sent him an email regarding him selling my image and how I am done being polite. I submitted a report to the eBay VeRO department regarding him using my intellectual design to make money, I also made posts on Blowout Cards forum, Beckett forum, the Trading Card Database forum and the Sports Card Forum.

Most people would respond the first time it was brought up and stop selling the card totally, scrap the image and move on but not this guy. Where a profit is to be made I am sure he is set to sell everyone else's work as his own.

All of this could have easily been averted had he just stopped using a design I posted back in January but apparently the $14.99 he got from the couple of cards he sold was too much to give up. Now because he had to turn this in to a big blow up and continue to claim his friend own the rights to the card and if I pushed him to stop selling the card he was going to hunt me down and turn his friend's lawyer on me I decided to go all out to stop this guy from selling his cheap copies.

I contacted Topps, Upper Deck and Beckett because he is selling cards with their logos/watermarks on them and I already have gotten a response from Upper Deck and they are getting involved.