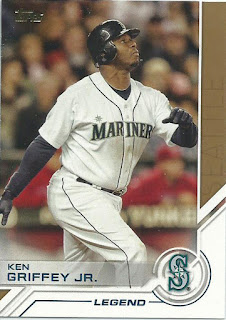 Opening weekend for baseball and all baseball fans are excited. I normally do not watch much baseball because I don’t get a many Mariners games here but yesterday I watched the Diamondbacks-Giants game and it was pretty amazing to see Bumgarner become the first pitcher to knock two homeruns on Opening Day. The second homer was almost on cue while the announcers were talking about it how it has never been done.

The Mariners opening game just started so I will take this time to post the first card I bought this year. Nothing special, it is a 2017 Topps Series 1 Salute Ken Griffey Jr and I finally gave in and bought it because it was a 99 cent BIN with free shipping.
Posted by Corky at 4/03/2017 05:28:00 PM