Congratulations To One Of The Best Pure Hitters Ever 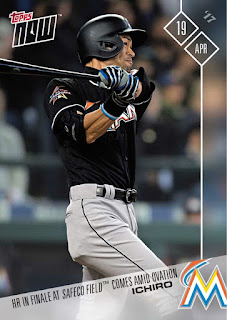 Last night in Seattle former Seattle Mariner and future Hall of Famer Ichiro came to bat in the 9th inning and knocked a home run in what is most likely his final at-bat at SafeCo Field. It was his first homer of the season and 3,033 US career hit (4,311 counting his NPB career) and to top it all off it was Ichiro Bobble head Night. The giveaway was a double Ichiro bobble head with one statue representing his 2004 record 262 hits in one season as a Seattle Mariner and one statue representing his 3,000 career hit last year as a Miami Marlin.

I plan on picking up the Topps Now card eventually but I am not a bobble head collector so I have no intent on getting one even if the prices were reasonable, even though it is a very cool piece. I just don't have the room to display them and they are huge dust collectors. 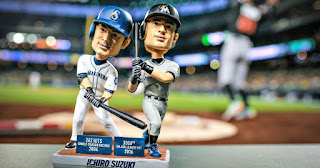